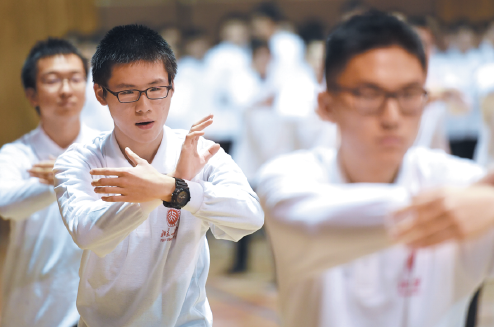 More than 140 students from Peking University take part in a tai chi competition at the campus in Beijing on Dec 23. [PHOTO BY WEI XIAOHAO/CHINA DAILY]
May the best warrior win. That was the ethos as college students from different tai chi teams prepared to compete on a recent Saturday morning. They struck powerful poses while regulating their breathing.
Traditional music served as their soundtrack.

The competition was organized by Peking University's Center for Wushu Research.

It was meant to advance students' understanding of traditional martial arts, or wushu in Chinese, after a monthlong training session.

Peking University claims a long tradition of tai chi instruction. Classes have been compulsory since the 1970s.

The art of tai chi ranges from routines to actual fighting, Wang says.

It enables students to understand their bodies and become resilient.

They learn defense in a way that goes beyond foreseeing rivals' movements.

It's said to balance the body and mind.

Tai chi is often described as "meditation in motion". It focuses on the entire body's coordination and flexibility.

And it has been found to improve practitioners' balance, leg strength and flexibility. That's not to mention sleep.

It's also believed to help elderly people by strengthening their knees, hearts and minds, Wang says. 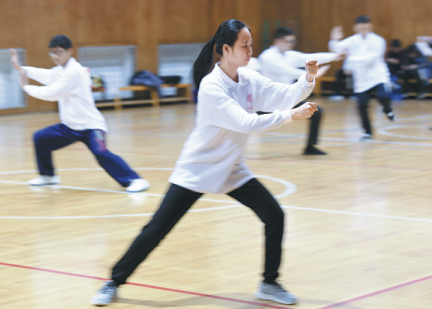 More than 140 students from Peking University take part in a tai chi competition at the campus in Beijing on Dec 23. [PHOTO BY WEI XIAOHAO/CHINA DAILY]
The Healthy China 2030 blueprint released by the Central Committee of the Communist Party of China and the State Council in 2016 also supports the promotion of tai chi and other traditional martial arts to improve public health.

Some students say it's more.

It's energizing yet relaxing, he says.

And it helps him improve his technique.

"It helps me to progress in martial arts."

The university has perpetuated traditional culture since its founding in 1898, Li points out. Many of its social science subjects rank highly, both nationally and internationally.

"Tai chi is embedded in our culture," Li says.

Taking Wang's tai chi class has taught sophomore Zhang Wenjun a lot about ancient culture, ranging from medicine to philosophy. And it has also helped him to find peace this semester. 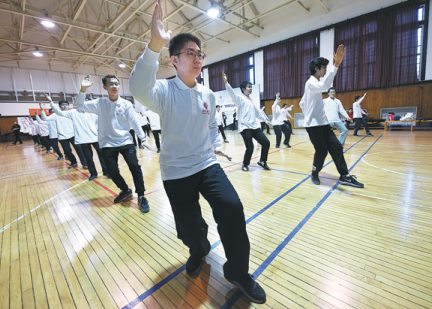 More than 140 students from Peking University take part in a tai chi competition at the campus in Beijing on Dec 23. [PHOTO BY WEI XIAOHAO/CHINA DAILY]

"But we young people should pass down traditions like tai chi. They may otherwise disappear."

Li points to the reasons that young people may be less likely to take up the martial art.

"It requires a solid foundation, unlike other more entertaining sports like soccer. Beginners may have a hard time buckling down to repeat the slow movements."

The university also employs martial arts masters, including a successor of Chen-style tai chi from Chenjiagou village, the cradle of the tai chi school in Henan province, Wang says.

The university plans to found a tai chi club to teach international students and visiting scholars this year.

"Those practitioners will get the chance to showcase their skills in our international cultural festivals on campus and among embassies," Wang says.

"They can also pass along what they learn when they return home. That's a great way to promote tai chi."