【2015 PKU Student of the Year】Li Zishu: Seek our roots and pursue our dreams

MAY . 13 2016
Peking University, April 29, 2016: "To get a deeper understanding of our country, I am very eager to do grass-roots work personally." said Li Zishu with determination. As a member of the poverty-reduction & investigation team sent by Hong Kong and Macao Affairs Office of the State Council, Li also has a "special identity"—a graduate student from the School of Government of Peking University. Recently, Li has been awarded "2015 PKU Student of the Year". And he is the only one who comes from Hong Kong, Macao and Taiwan regions to have received this award.
Li Zishu came from Hong Kong and received his bachelor's degree of Traditional Chinese Medicine at University of Hong Kong (HKU).In 2014, he was accepted by PKU with the 1st ranking in the national entrance examination for postgraduate students from HK, Macao, and Taiwan and overseas. Besides, in 2015, Li was recommended to take a titular position in Wuqing District government. 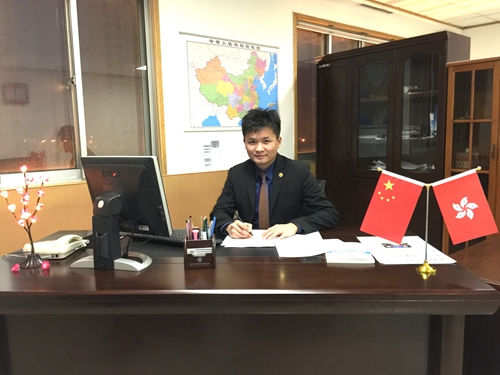 Due to Western cultural influences, Western medicine has become the mainstream in the HK academic and professional circles. However, because of his deep love of Chinese culture, Li Zishu determinedly chose to major in Chinese medicine in HKU. He viewed it as a way to carry forward the fine traditional Chinese culture.
Aiming to keep Chinese medicine advancing with the times, Li spared no effort to acquire more medical knowledge and put it into practice. “I always dream of becoming a doctor upholding the principle of humanity and benevolence. That dream is the impetus for me to study those difficult medical classics and ancient prescriptions. If it is possible, I want to establish a Chinese medicine hospital to heal the sick and save lives.” said Li sincerely.
Besides, in order to pursue his dreams, Li endeavors to achieve all-round development. He was an excellent student leader in HKU. When he was still a freshman, he was elected chairman of Students' Association Union and was in complete charge of more than twenty student associations in HKU. In his second year, he became the youngest executive of the college and member of the school councils. In the third year, he was elected chair of the Student Union of HKU. Li seized every opportunity to improve and perfect himself.
Studying at Peking University: Seeking roots and pursuing dreams
Li Zishu said that in his friends’ and teachers’ opinion, his choice to come to Mainland China and to study at PKU is somehow incredible. But Li explained that he was actually inspired by a “special” alumni—Premier Li Keqiang. Li Zishu received Premier Li when he came to HKU to celebrate its 100thanniversary. Since then, he began to follow the development of PKU. And finally, he made up his mind to study at PKU. Besides, Li’s ancestral home is Fujian so that coming to study in Mainland China also gives him a chance to seek his roots.
Now, Li is an MPA student in the School of Government. The ideal upheld by his school—to base on the national conditions, take a global outlook, seek truth and practicality and strive for excellence—agrees with Li’s dream. And he is provided with more opportunities to achieve his goals.
“I can better understand my country from firsthand experience,” said Li firmly. In 2015, he became the Deputy General Manager in the head office of the national-level Wuqing Development Zone. He devotes himself to the complex and difficult grass-roots work. Whatever happens, he will stick to his principles and pursue his dreams. Li Zishu has proven to the whole world through his behaviors that he is a PKU student, and is going to make his alma mater and his country very proud.