MAY . 27 2016
Peking University, May 22, 2016: A seal-script board lying on the bookshelf stands out conspicuously the moment anyone walks into Li Ling’s office. “Dai Tu Xuan” is written on the board, “daitu” meaning “waiting for a rabbit” and “xuan” referring to a traditional Chinese room with windows. The name originates from an interesting story when Li was engaged in archeological work at Baoji, Shaanxi Province. It was a hard time with poor material condition. But one day suddenly a rabbit coming from nowhere fell into the pit he was working in, and became his most memorable feast during that hard time. It reminded him of a traditional Chinese idiom “shou zhu dai tu”, meaning waiting by a trunk for a rabbit. Thus he named his office “Dai Tu”.
Man of letters at PKU
Li Ling is fascinated by books. Three huge bookshelves occupy most space and books range in various subjects. From China Cultural Relic Atlas, JingMen ZuoZhongChu Tomb, to China Medical Practice and Fortune Telling Research and The Art of Enlightenment, these books not only include his three professional domains (archeology, archive research and ancient literature) but also dabble in other fields. His research seems diversified based on his various reading——he even spares time to attend the thesis defense of Institute of Traditional Chinese Medicine and write some essays. It is hard to title him merely as archeologist, archival scholar or philologist. 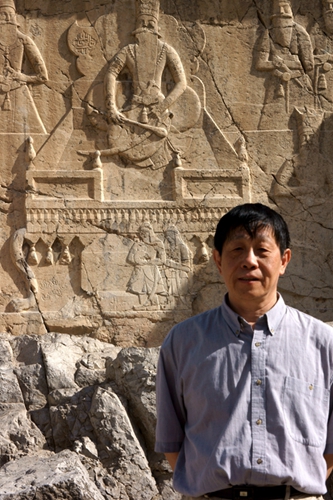 The habit of pursuing different kinds of knowledge derives from Li’s experience when he was sent to Inner Mongolia for socialism mass production during the Cultural Revolution. Reading at that time, without regular training or arrangement, was more for entertainment and relaxation. Chinese ancient politician Cao Cao once said in a poem “The only thing that can allay sorrow is liquor”. Li Ling adapts this as “The only thing that can allay sorrow is reading.” His ideas resemble those of the Chinese ancient poet Tao Yuanming, who featured in widely reading without deep researching.
From Li’s perspective, reading follows the interest. And so does his research career. At first he majored in bronze ware at the archeology department of Chinese Academy of Social Sciences. Later he was tutored by Zhang Zhenglang researching ancient literature and writing. With coincident, he finally came to Peking University to study and teach Sun Tzu and The Analects of Confucius in the department of Chinese Language and Literature.
Stand-byer of the world
As a man of letters, Li not only indulges in books in his quiet study, sometimes he will also listen to murmurs and twitters of the outside world.
To some extent, Li’s essays are better-known than his academic accomplishments. His essays lead people to deep meditation on issues including the relationship between the male and female, strategies and tactics on wars and traditional culture as can be seen from his “From a pot of wine among the flowers I drank alone”, “Allowing the tiger back to its mountain”, and “The bird sings”.
After “playing” in the field of academic research for a long time, “I feel some statements unbearable when observing the world on the sidelines”, Li says. At that time, Li cannot stop but express some different opinions and write them down slowly, thus finishing his essays in this way. He dislikes reluctant behaviors such as “to write a song pretending sadness”. He believes that writing should not “make up emotions for the text”. Instead, it ought to spring from thoughts and observations on social phenomena. 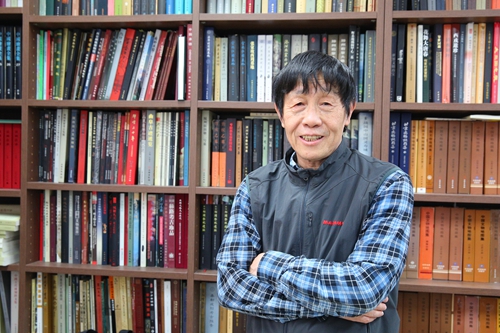 Many of Li’s essays are his reading notes. He always enjoys writing as a “reader” and communicating with his readers by writing. “I’m not good at talking or commenting while teaching or at other public conditions. Consequently, my communication with my readers is through the inner world.”
Since he is not good at commenting, Li does not care about others’ comments as well. After finishing a book, the book does not belong to himself any more. “No matter what others say about the book, I just continue my work with a peaceful mind.” Li says. Li pays more attention to the quality of his books. His eyesight gets worse as years pass by while his workload does not decrease. As a result, he often asks his students to help correct his books. He says frankly that his readers are also welcome to help him find any mistakes in the book.
In this way, Li talks with his readers about the world through his essays.
“I am in reality outdated”
Li says he seldom spends money, surfs the Internet or watches anything. He does not enjoy talking or being in the mass. Sometimes he would be considered an old-fashioned scholar, and his only pleasure is reading and thinking except sometimes communicating with his readers. He dislikes the noise outside, and gets much of his information from his students.
Li does not enjoy himself much being in the mass, especially when attending meetings or activities. As for the honors and reputation, he seems to have an open mind: “I read Daoism books in the closed south building”. When talked about attaining the title of academician of American Academy of Arts and Sciences, he smiles and says “Someone called me today, saying that I’ve got another hat. Actually before this I have no hat, and it should be I’ve just got the first hat. I’m still myself, exactly the same as before.”

Though having got the international prize, Li hopes there will not be many relative issues. “The less trouble I have, the better. I hope to do things that are freer and easier.” When describing the things he wants to do, he looks at the bookshelf and says: “Of course there are many things that I cannot do. You see, there are many books here waiting to be arranged, but there is no time for that. To be honest, this is the end for a scholar: books everywhere, in the house, in this room…I’ve always wanted to arrange them, and feel the books to be of some use and should not be disposed of. But you cannot take all the books into you coffin, so the end of a scholar is either donating or selling his books. At the end, when you cannot use them, no matter how good they are, they do not worth anything.” He becomes silent for a while. “Which ‘trunk’ (zhu) are you staying by, and which ‘rabbit’ (tu) are you waiting for?” Li was asked near the end of the interview.
“The ‘trunk’ means body. I did not pay attention to the health of my body when I was young. I regret it a lot now. The other meaning is to keep time, and become ‘a miser for time’. Cherish time and never waste it.”
“I often joked to name the place I live in as ‘a building for the loss of ambition’ (Sang Zhi Lou). ‘Loss of ambition’ indicates ‘being immersed in entertainment’, and one who is immersed in interests and entertainment will lose his ambition. At that time, I asked Rao Zongyi (a famous calligrapher) to write down “Sang Zhi Lou” for me. But he refused because he thought it was not a lucky name.”
“But come back to “shou zhu dai tu”. I used to doubt it, but I have a faith in it now.”
Li holds the opinion that people should not stick to one thing all the time since every branch of learning is so broad and profound that no one can fully master it. “For example, it is difficult to learn throughout the Chinese history even given three thousand more years. Trying your interest in different fields is a better idea.” Said Li, and so he practices.
Background information:
Li Ling, professor and doctoral tutor in the department of Chinese Language and Literature at Peking University, once visiting professor at the University of Chicago, École française d'Extrême-Orient. He has attended various academy conferences and delivered speeches around America, France, Japan, Russia and other countries and regions. In 2016 he became academician of the American Academy of Arts and Sciences.
Written by: Shang Baoyue, Wang Zehua
Edited by: Yan Shengnan
Source: PKU News Center
People
Sun Qixiang: National March 8 Red-banner Pace-setter
more
Research
Breakthrough in fuel cell cathode electrocatalysis published...
more
Focus
Peking University and Bayer HealthCare signs Strategic Partn...
more
Campus
8th Sports Dance Contest for Beijing’s Universities held at ...
more
Media
Celebrating Mathematics: Xu Chenyang wins Rananujan Prize
more