SEP . 18 2017
Peking University, September 15, 2017:  In the autumn of 2017, 1500 freshmen traveled across the oceans, stepped into Yan Yuan, and became a part of PKU. These fresh and new bloods’ arrival has helped to create the unique and international image of PKU. Excited but nervous juniors, passionate and patient seniors, responsible members of overseas’ student union, all of these flavors and lightens our internationalized campus. 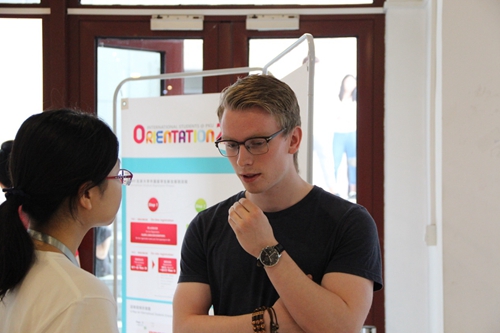 Although we all knew that Peking University has students  from all over the world, the reporter still stunned while she heard that Birkir Mar, a shy male student mentioned, “I come from Iceland” in the interview.
Birkir Mar is an undergraduate student of class of 2021, majoring international study. Before starting his studies, Birkir had already completed a one-year preparatory course in Peking University. “In our preparatory course, we focus on Chinese Language, Mathematics and other basic subjects. “ said Birkir Mar.

Birkir Mar mentioned, “In the view of content, the Mathematic I learnt in PKU is about the range of I have learnt in Iceland. In fact, the hardest part is application. I used to think that I am good at Mathematics, but I can’t help to feel a little bit stressful while learning Mathematics here.”

Although Birkir had gone through many challenges during his preparatory course, he still believes he gained a lot from it. In this one-year course, he receives the chance to know friends from other foreign countries, Birkir now has a better understanding on diverse culture, which, he believes, will somehow help him with his major.
Bikir explained that he always plans to study overseas. The final reason that makes him decide to come to China is her Chinese girlfriend. “From her, I get to know more about China. I think coming to China will be a great opportunity for me.” said Bikir. Then, he further explained that, “Both of us come to Beijing. Being with each other is easier” while pointing at his girlfriend who sat beside him.
In Iceland, Birkir used to hear his girlfriend’s family speaking Chinese and watching Chinese drama. Therefore, he already had some simple knowledge about Chinese culture before coming to China. In the coming four years at Peking University, Birkir hopes he could gain plentiful of experiences and profound understanding of the culture.
Mentioning his major, Birkir has high expectation. “I am really interested in Chinese people’s view about their own country and other countries. As we all knew that Iceland is a very small country, our discourse power is not strong enough to be valued in international politics. On the other hand, China has stronger influence and power in international politics issues. Thus, it is important to know the opinions of people in China. As Peking University is the best university in China, I have great confidence that I would learn a lot here.” said Birkir.

Birkir thinks a lot and has a lot of t plans for his future study life. He hopes to know more about the Chinese attitude in politics and their views of other countries. In fact, he has also planned to focus his studies on “Views of the Chinese of the European Countries and History “. Birkir hopes to have more Chinese friends, so that he can understand the culture better.