PAN Wei: Why do Western-centrists fail to understand the Chinese path?

Peking University, November 16, 2021: With the rise of developed Western countries in the past few centuries, Western-centrism has arisen. There are Western-Centrists who believe that the western understanding of human politics is the only one which is correct and universal, and they have cognitive biases to the political path chosen by China. What are the historical causes of these cognitive biases？Can these biases be eliminated? How should China deal with some Western countries that are obsessed with the “Center Position ”?

PAN Wei, Professor of School of International Studies of Peking University and the Director of Center for Chinese and Global Affairs of Peking University, recently gave an exclusive interview to “WE Talk” of China News Service(CNS) to explain the relevant questions. He argued that the rise of China will reduce western cultural bias against “the other” and become a force for the rise of cross-border “world civilization”. 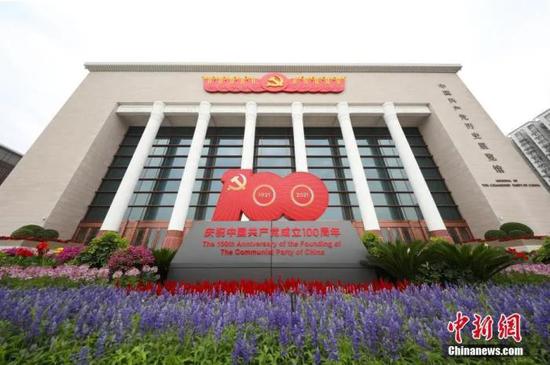 The Museum of the Communist Party of China. (File photo/China News Service)

The summary of the interview is as follows:

CNS: What is the Western-Centrism? What misconceptions do Western centrists have about China’s political path?

PAN Wei: -ism means “important” or “supreme”. Western-Centrism emphasizes that the Western civilization, with “freedom, democracy and human right” as its core values, is the best civilization of mankind, and believes that its understanding of human politics is the only correct and universal. This is probably what young people refer to as an obsession with the “Center Position”.

There are four causes for the emergence of Western-Centrism, which lead them to misunderstand the socialist path with Chinese characteristics.

First, at the cultural level. Western centrism is an absolutism. In terms of religion, they grew up in a “monotheistic” culture; in terms of philosophy, they are accustomed to the “dichotomy” of right or wrong. In terms of political systems, they believe that if capitalism is Right, communism is Wrong. The lack of relativist epistemology makes it difficult for them to tolerate China’s unique political path.

Third, at the political ideology level. China sees Marxism in a pragmatic and theoretically relevant way, and develops Marxism in the context of traditional Chinese theory. Western centrists, seeing that Marx’s ‘prophecies’ had not been fulfilled in the 19th century, considered Marx’s ideas to be wrong and were suspicious of China’s adherence to Marxist theory in favor of a political path. In an either-or monotheistic culture, it is difficult for them to understand the two combinations in China’s handling of political ideology, that is, “continue to adapt the basic tenets of Marxism to China’s specific realities and its fine traditional culture”(坚持把马克思主义基本原理同中国具体实际相结合、同中华优秀传统文化相结合).

Fourth, at the level of the political community. The relationships among countries in the world are mainly between political communities competing for survival and development. General Secretary of the Communist Party of China (CPC) Central Committee Xi Jinping made it clear in his speech of a ceremony celebrating the CPC centenary, “All the struggle, sacrifice, and creation through which the Party has united and led the Chinese people over the past hundred years has been tied together by one ultimate theme—bringing about the great rejuvenation of the Chinese nation” (百年来，中国共产党团结带领中国人民进行的一切奋斗、一切牺牲、一切创造，都围绕一个主题，就是中华民族的伟大复兴).The competition between political communities depends on three factors: the first is the scale, that is, integrated national and territorial size. The second is cohesiveness. The third is productivity. For the Western-Centrists, China poses growing competitive pressures on all three of these factors. However, they fail to realize that China’s global proposal to build a community with a shared future for mankind is in line with the historical trend. China recognizes that the planet is becoming smaller in relation to population and human technology that the destinies of humanity are increasingly intertwined, and that cooperation should therefore prevail over competition.

PAN Wei: Some Western-Centrists believe that Marxism-Leninism wants to eliminate private ownership, end the market mechanism and overthrow the existing world economic order. They hope to create the impression in the West and the world that the Chinese Communist Party wants to expand, to overthrow the existing world economic order and to replace it with communism.

Constitution of the Communist Party of China includes Marxism-Leninism in its guides to action, but emphasizes that the Communist Party of China is “the vanguard of the Chinese nation”(中华民族的先锋队), a point that many Western-Centrists deliberately ignore. The CPC has been constantly enriching its theoretical system, with “Xi Jinping Thought on Socialism with Chinese Characteristics for a New Era”(习近平新时代中国特色社会主义思想) as the party’s latest guide to action, and adhering to “ the people-centered philosophy of development.” Historically, the Sinicization of Marxism has continued to achieve new results and has long since made a theoretical leap forward. In fact, China under the leadership of the Communist Party of China is a defender and builder of the international order, rather than a challenger or “free rider”.

Therefore, we need to make clear what socialism with Chinese characteristics is.

Historically, “Grand Unification”(大一统)forged the legitimacy of the Chinese regime. Today, China upholds and improves the leadership of the Communist Party of China, takes care of the Chinese people, makes the country prosperous and the people live and work in peace, which is why the Communist Party of China has been in governance over the long term. Western-centrists, who believe in a plurality of social interests fighting against each other, find it difficult to tolerate the Chinese political model, believing that their own political model is “universal” and the only “truth”.

CNS: One of the prominent manifestations of the Western-centrists’ failure to understand China’s political path is the belief that China is “strong and will hegemonize”(国强必霸). What do you think about this zero-sum perspective on China’s international relations?

PAN Wei: The three-hundred-year historical path of western countries dominating the world has led to the westerners’ understanding of the laws of international relations of zero-sum hegemony. Therefore, in their view, a strong China is bound to follow the path of military hegemony to support economic hegemony, political institutional hegemony, ideological hegemony and even cultural hegemony.

On 27 September, Pan Yue, Director of the Overseas Chinese Affairs Office of the State Council, explained at the 7th Nishan Forum on World Civilizations several major “ways” of Chinese civilisation, including “unity and stability, unity in diversity, inclusiveness and openness, ethics of responsibility, neutrality and peace”(统一安定、多元一体、包容开放、责任伦理、中正和平). In my opinion, Chinese civilization is not good at using sword, making scriptures and written letters, nor is it capable of dominating the world. China is not a missionary civilization, but a learning civilization. China is also a secular civilization, that is, a political civilization centered on people’s “living a good life”.

Western-Centrists will realize that the 21st century is no longer a century for one country to monopolize and bully others at will. The goal of Chinese diplomacy has always been to safeguard its independence and sovereignty and to promote peaceful development in the world. Since 1950, the slogans on Tiananmen Tower are “Long live the People’s Republic of China” and “Long Live the Great Unity of the World’s Peoples”. The Communist Party of China has declared that its mission in the world is to promote the building of a community of human destiny.

The rise of China will put an end to the international political structure of one country dominating the world. But this does not mean the decline of the West. The tertiary industries which the West is good at will not decline, but will only flourish with the participation of China. Western idealism about the human spirit will not wane, but will be bolstered by the arrival of the Chinese on the world stage. The rise of China will reduce western cultural prejudice against “the other” and become a promoter of world prosperity and peace, a contributor to the rise of a cross-border “world civilization”.

CNS: How should China view Western systems in the light of Western-centrist misconceptions about China? Should we distinguish between the extreme foreign policies adopted by individual Western countries and the system itself in which they live?

PAN Wei: I very much agree with Fei Xiaotong’s statement that“Appreciate the culture of others as do to one’s own, and the world will become a harmonious whole”（各美其美，美人之美，美美与共，天下大同）. We criticize the US foreign policy of containment of China, but do not criticize the western political system. Each country has its own system according to its own national conditions, and we respect it. However, we resent others to telling us what we should do with our system, and we do not tell others what to do with theirs.

Since “Appreciate the culture of others as do to one’s own”（各美其美）, we should be modest and conscientiously learn from the merits of other civilisations. But this is not blind obedience or faith. After all, the rise and fall of countries under the same system is not necessarily the fault of the system.

I have no doubt about the nature of China’s 3,000-year grand unified civilization, and I am convinced that a concentric socialist family is suitable for China. China is not a missionary civilization because it is a secular, learning civilization. The Grand Unification is wide, and can be tolerant of other’s differences. We believe that “the junzi (君子,Confucian gentleman) maintains harmonious and friendly relations with others, but does not blindly agree with them; the xiaoren (小人,small person) panders to and parrots the opinions of others, but does not harbor a harmonious and friendly attitude towards them in his heart”(君子和而不同，小人同而不和). We advocate the peaceful development of the world and strive to promote a community with a shared future for mankind. In contrast, Western-centrists, led by the United States, advocate the clash of civilizations and call for the collective suppression of China, which is narrow-minded and even racist. 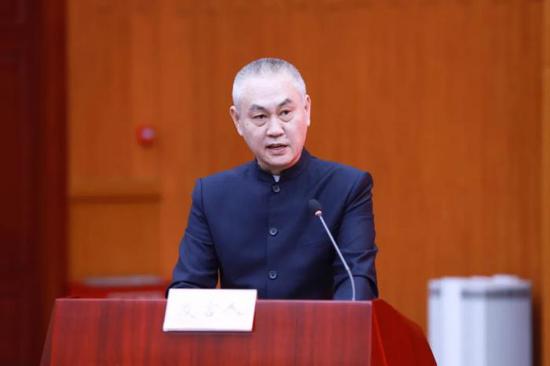 PAN Wei is professor of School of International Studies of Peking University, and the Director of Center for Chinese and Global Affairs of Peking University. PAN obtained his Bachelor’s degree and Master’s degree in International Politics at Peking University and PhD in Politics at University of California, Berkeley. His main research fields are Chinese politics and world politics. His works include Comparative Politics: Theory & Methodology（《比较政治学理论与方法》）, Contemporary Chinese System（《当代中华体制》）, Essays in Rule of Law and the Myth of Democracy（《法治与民主迷信》）, Behind China's Economic Miracle（《农民与市场》）, Belief in the People（《信仰人民》）, Shi Zhe Hong Yi（《士者弘毅》）,etc.