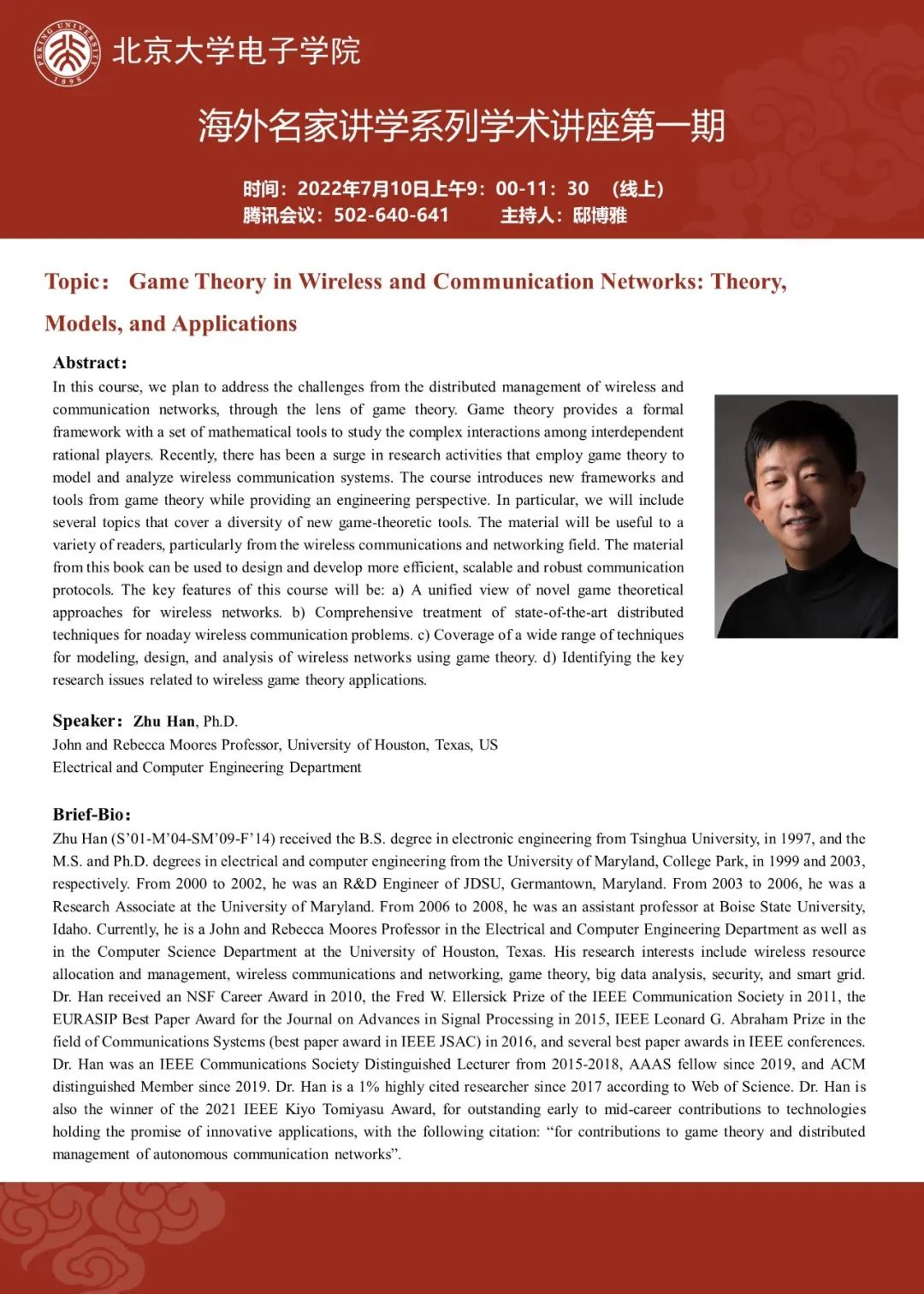 In this course, we plan to address the challenges from the distributed management of wireless and communication networks, through the lens of game theory. Game theory provides a formal framework with a set of mathematical tools to study the complex interactions among interdependent rational players. Recently, there has been a surge in research activities that employ game theory to model and analyze wireless communication systems. The course introduces new frameworks and tools from game theory while providing an engineering perspective. In particular, we will include several topics that cover a diversity of new game-theoretic tools. The material will be useful to a variety of readers, particularly from the wireless communications and networking field. The material from this book can be used to design and develop more efficient, scalable and robust communication protocols. The key features of this course will be: a) A unified view of novel game theoretical approaches for wireless networks. b) Comprehensive treatment of state-of-the-art distributed techniques for noaday wireless communication problems. c) Coverage of a wide range of techniques for modeling, design, and analysis of wireless networks using game theory. d) Identifying the key research issues related to wireless game theory applications.

Zhu Han received the B.S. degree in electronic engineering from Tsinghua University, in 1997, and the M.S. and Ph.D. degrees in electrical and computer engineering from the University of Maryland, College Park, in 1999 and 2003, respectively. From 2000 to 2002, he was an R&D Engineer of JDSU, Germantown, Maryland. From 2003 to 2006, he was a Research Associate at the University of Maryland. From 2006 to 2008, he was an assistant professor at Boise State University, Idaho. Currently, he is a John and Rebecca Moores Professor in the Electrical and Computer Engineering Department as well as in the Computer Science Department at the University of Houston, Texas. His research interests include wireless resource allocation and management, wireless communications and networking, game theory, big data analysis, security, and smart grid.  Dr. Han received an NSF Career Award in 2010, the Fred W. Ellersick Prize of the IEEE Communication Society in 2011, the EURASIP Best Paper Award for the Journal on Advances in Signal Processing in 2015, IEEE Leonard G. Abraham Prize in the field of Communications Systems (best paper award in IEEE JSAC) in 2016, and several best paper awards in IEEE conferences. Dr. Han was an IEEE Communications Society Distinguished Lecturer from 2015-2018, AAAS fellow since 2019, and ACM distinguished Member since 2019. Dr. Han is a 1% highly cited researcher since 2017 according to Web of Science. Dr. Han is also the winner of the 2021 IEEE Kiyo Tomiyasu Award, for outstanding early to mid-career contributions to technologies holding the promise of innovative applications, with the following citation: “for contributions to game theory and distributed management of autonomous communication networks”.