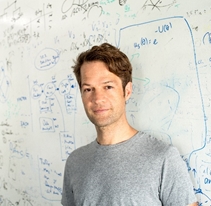 Fabian Theis is the Director of the Computational Health Center at Helmholtz Munich and Scientific Director of HelmholtzAI, launched in 2019. He is a Full Professor at the Technical University of Munich, holding the chair ‘Mathematical Modelling of Biological Systems’, Associate Faculty at the Wellcome Trust Sanger Institute, and Adjunct Faculty at Northwestern University, Feinberg School of Medicine.

Fabian Theis uses artificial intelligence to uncover the secret of human cells. How do they interact, and what's going wrong at the cellular level when someone falls ill? By using single-cell Sequencing, he and his team are able to model the variety of cells and their activities. machine learning and deep learning are also used to help make predictions in biology and biomedicine.

During his academic career, Fabian Theis obtained MSc degrees in Mathematics and Physics at the University of Regensburg in 2000. He received a Ph.D. degree in Physics from the same university in 2002 and a Ph.D. in Computer Science from the University of Granada in 2003. He worked as visiting researcher at the Department of Architecture and Computer Technology (University of Granada, Spain), at the RIKEN Brain Science Institute (Wako, Japan), at FAMU-FSU (Florida State University, USA), and TUAT’s Laboratory for Signal and Image Processing (Tokyo, Japan), and headed the ‘signal processing & information theory’ group at the Institute of Biophysics (Regensburg, Germany). In 2006, he started working as a Bernstein fellow leading a junior research group at the Bernstein Center for Computational Neuroscience, located at the Max Planck Institute for Dynamics and Self-Organisation at Göttingen. In the summer of 2007, Fabian Theis became the working group head of CMB at the Institute of Bioinformatics at the Helmholtz Center Munich. In the spring of 2009, he became an associate Professor for Mathematics in Systems Biology at the Math Department of the Technical University Munich TUM. 2009-2014 he was a member of the ‘Young Academy’ (founded by the Berlin-Brandenburg Academy of Sciences and Humanities and the German Academy of Natural Scientists Leopoldina) and was awarded an ERC starting grant in 2010.

In 2017 he was awarded the Erwin Schrödinger prize, and Fabian Theis was honored with the Hamburg Science Award, the most highly endowed prize of a science academy in Germany. Fabian Theis is part of and coordinates various consortia and founded the network SingleCellOmics Germany (SCOG). Furthermore, he coordinates the Munich School for Data Science (MUDS) and is co-directing the ELLIS Munich Unit, the local hub of the European Machine Learning network ELLIS. Since 2020, he has been co-chair of the Bavarian AI Council of the Bavarian Ministry for Science and Art and supports the TUM with his expertise as a start-up Ambassador and a core member of the Munich Data Science Institute (MDSI).

Professor Dr. Fabian Theis received one of the prestigious Advanced Grants from the European Research Council (ERC) for his project "DeepCell". Additionally, Fabian Theis was accepted for membership in the European Molecular Biology Organization (EMBO) in July 2022 and was appointed to the Board of Directors of Human Cell Atlas, Inc.