Please Enter Keywords
TOP

Home
News Center
Research
Text
Multi-photon MINFLUX improves resolution and promotes multi-color imaging
Apr 02, 2022
Peking University, April 2, 2022: The resolution of optical microscopy is limited by diffraction limit and can only achieve a resolution of about 200 nm. In the past two decades, a series of technologies, such as STED, SIM, PALM/STORM, DNA-PAINT, have broken through the limitation of optical diffraction through the modulation of point spread function (PSF), making the optical resolution as low as 20nm, which has been widely used in biology and won the Nobel Prize in Chemistry in 2014.

In 2017, Nobel laureate Stefan Hell (inventor of STED technology) developed MINFLUX technology (MINimal photon FLUXes) and called it "microscopy in the post-Nobel Prize era". MINFLUX further improves the optical resolution to achieve a localization precision of about 1 nm and a spatial resolution of about 5 nm. MINFLUX, as a single-molecule localization technology, combines the characteristics of STED and STORM. Unlike the depletion light of STED, which uses a donut-shaped hollow spot, MINFLUX uses the donut as the excitation light; similar to the principle of GPS positioning, MINFLUX uses a donut beam to excite the fluorescent molecules multiple times, and then the location of the fluorescent molecule can be estimated by statistical methods.

This work has been highlighted by the research group of Professor Fernando Stefani, an authoritative super-resolution expert, and published in Light: Science & Applications with the title of “Multiphoton single-molecule localization by sequential excitation with light minima” . Comments point out that this work provides a prospective theoretical basis for both the introduction of multiphoton effects into MINFLUX technology, and the future application of MINFLUX to deep biological imaging and achieving higher localization precision.

The localization precision of MINFLUX is represented by the Cramér–Rao Bound lower bound (CRB). Through mathematical derivation, the article rigorously proves that the two-photon effect makes the CRB changed to 1/2 of the original, that is, the localization precision is increased by 2 times, and the improvement is true for the three dimensions of xyz. At the same time, the authors and other researchers further analyzed the influence of various experimental parameters on the localization accuracy, including the number of fluorescent photons, bias length, and signal-to-background ratio. Similar to the existing MINFLUX technology (1p-MINFLUX), in 2p-MINFLUX, the signal-to-background ratio determines the minimum value of the bias length, which ultimately limits the achievable localization accuracy. In fact, one of the characteristics of two-photon technology is to reduce the fluorescence background out of focus. Since two-photon excitation only occurs at the focal point and no excitation elsewhere in three-dimensional space, two-photon MINFLUX has a lower background than single-photon MINFLUX, which may further improve the localization accuracy. In order to directly compare the performance of the two-photon MINFLUX and the existing MINFLUX technology, the numerical selection of each parameter is consistent in the simulation. 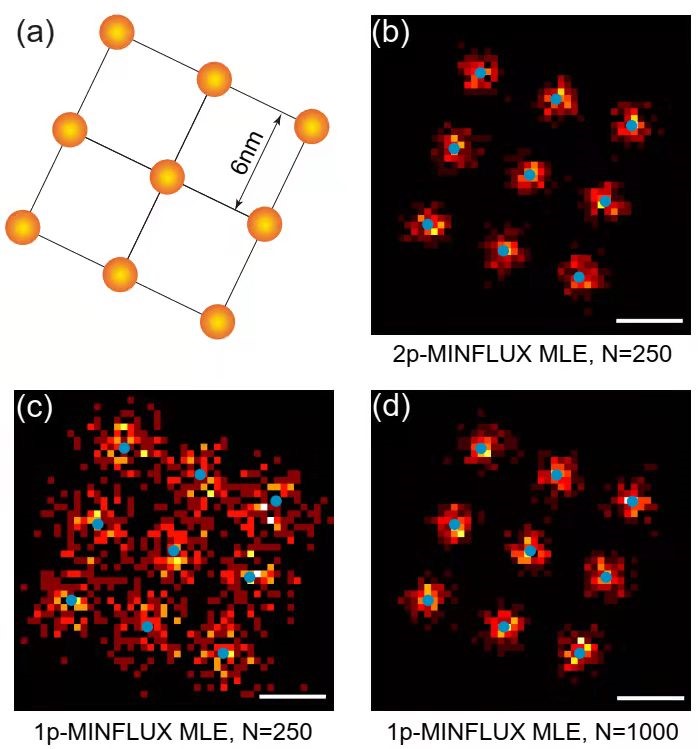 In summary, the resolution of MINFLUX technique can be promoted by the two-photon nonlinear effect, which can improve both the localization precision and resolution by 2 times, or reduce the required number of fluorescent photons by 4 times. The resolution of fluorescence microscopy can be further approached to the limit of the scale of individual molecules. The authors conclude that, due to the existence of two-photon nonlinear effects, 2p-MINFLUX may have more direct multi-color imaging capabilities; at the same time, 2p-MINFLUX can be utilized not only as a super-resolution imaging method, but also as a high-speed multi-color single molecule method for tracking. This technology can further promote basic research in the field of biomedicine, especially the research on biological interactions such as nucleic acid-protein interactions and virus-cell interactions.

Edited by: Hu Rong
Source: College of Future Technology
Latest
YOU MAY ALSO LIKE