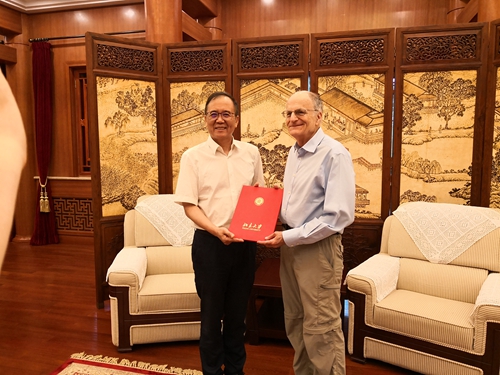 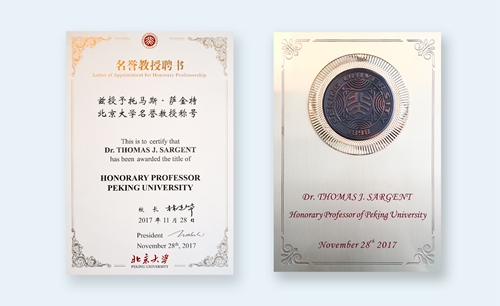 Certificate and medal of Honorary Professorship

Sargent is a leader of the rational expectation school and has greatly contributed to the establishment and development of new classical microeconomics. He was awarded the Nobel Memorial Prize in Economics in 2011. He is a member of the National Academy of Sciences and the American Academy of Arts and Sciences, and is a Fellow of the Econometric Society. He served as the chairman of many international economic institutions, including the American Economic Association and the Econometric Society.

On June 8, 2017, Sargent joined PHBS and became director of the Sargent Institute of Quantitative Economics and Finance. In November, 2017, after PHBS and Ping An Technology announced the official launch of full-scale cooperation in macroeconomics and financial research, Sargent served as chief consultant for research work. In January, 2018, Sargent organized the “2018 Quantitative Economics Winter Camp” of PHBS and expounded on the application of Python in quantitative economics.

On the day of the presentation of the Honorary Professorship, Lin Jianhua, Sargent, and Hai Wen discussed diverse topics such as the history of scientific development and the development of Peking University. Lin, who majored in chemistry, talked with Sargent about the discovery of the periodic table, and Sargent shared with Lin what he had learnt from studying economics.