AUG . 20 2018
Peking University, Aug 13, 2018: On the morning of August 13, the opening ceremony of the 24th World Congress of Philosophy was held in the Great Hall of the People. It was the first time that the largest-scale philosophy conference had come to China. With the framework of Chinese traditional philosophical thinking, the congress conveyed great attention the international philosophical circles had paid to Chinese philosophy and its cultural values, and increased China’s sway over humanistic studies around the world.

President Lin retrospected the history and academic characteristics of humanities in PKU, and illustrated the close relationship between “Learn to Be Human” and college education. Professor Scarantino looked back to the preparation work and academic tradition of this congress, and expounded how philosophical introspection was combined with zeitgeist. Professor Moran combed through the relations between current developments of philosophy and the challenges ahead, and stressed the responsibility and value of philosophy in current society. The guests offered congratulations to the opening of this conference, and granted wishes to further comprehension and communication between philosophers and humanists, as well as China and the world.

The congress was jointly organized by Fédération Internationale des Sociétés de Philosophie and Peking University, and its theme was “Learning to Be Human”. As one of a series of activities to celebrate the 120th anniversary, the congress was fully supported by PKU and other foundations.

Before the congress commenced, it had received over 5000 essays, covering all fields centered on philosophy. Considering the number of attendees, contributions and sessions, it was the largest-scale congress in over 100 years. The congress would last a week (8.13-8.20), including more than 1000 sessions. (For more details, check the website: wcp2018.pku.edu.cn) The congress also attracted over 6000 eminent scholars from 121 countries with distinctive philosophical specialties, which weaved grander panorama of current philosophy in the whole world.
As its debut in China, the congress would serve not only as a stage for China to display its traditional philosophical thoughts and current humanistic values, but also as an important opportunity for China to construct its own discourse system of academic humanities and theoretical methods. Every part of the congress highlighted Chinese characteristics in past and present. Meanwhile, philosophers from South America, Africa, and other districts spoke for the diversity and globality of the congress, making philosophical reflection an essential ligament in cultural communication. Chinese traditional thoughts would offer more open-minded and inclusive space to the development of world philosophy, and the congress in turn would promote the mutual comprehension between China and the world, and pushed ahead the development and social sciences. 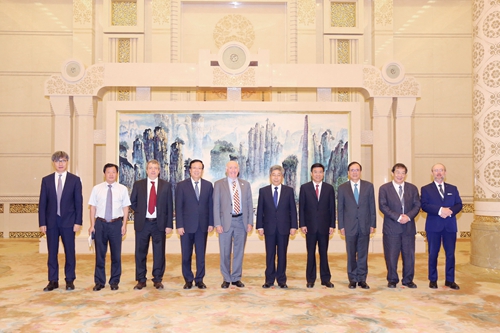